How much is your spirit worth? 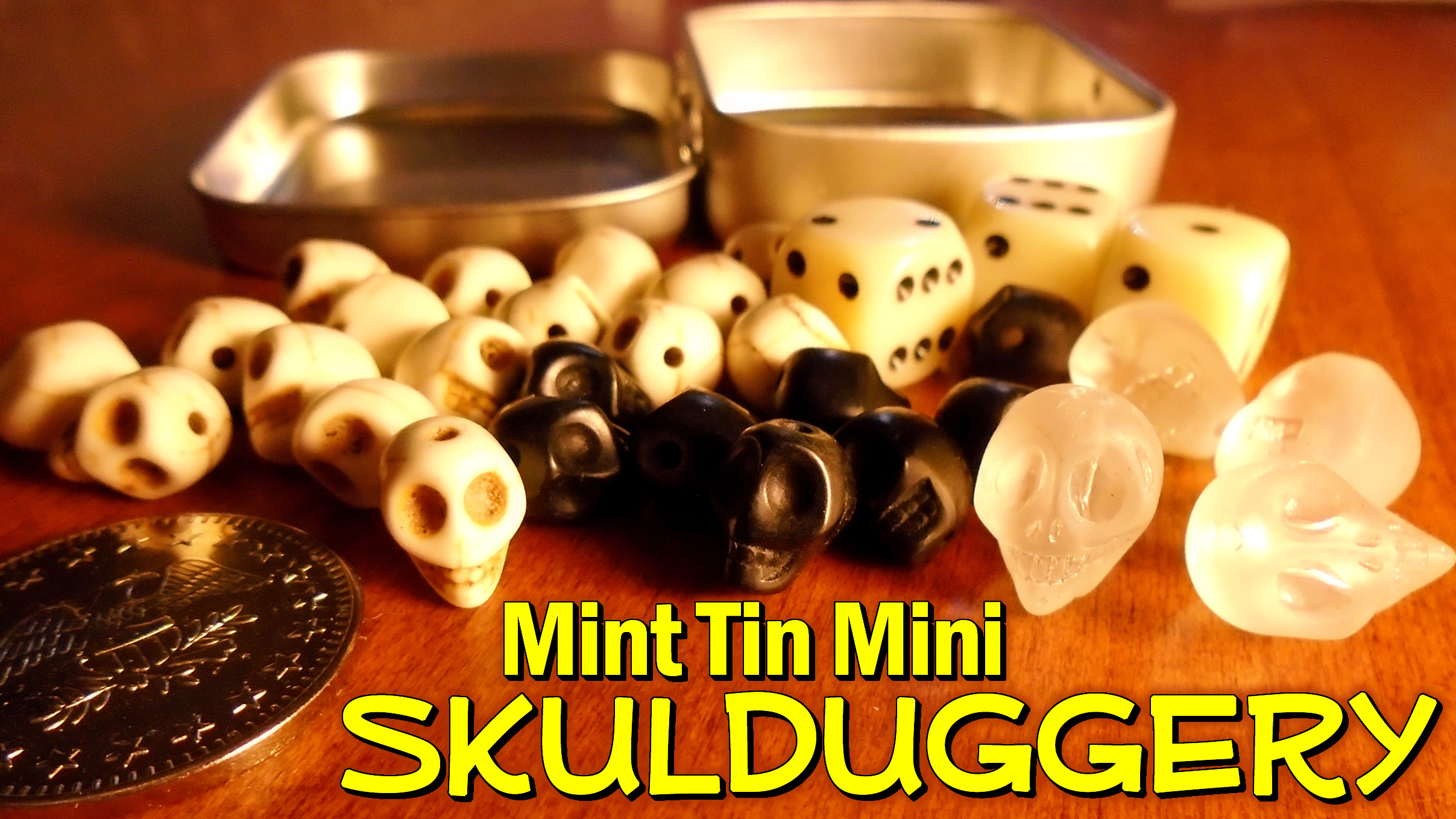 Invoke spirits of the ethereal realm to help you roll your way to victory, shatter the rolls of opponents, and push your luck without unleashing skulduggery!

Want an actual pocket-sized game that is cheap, quick, easy, fun, plays 1-4 players, has bulletproof components, and has the option for interaction even when it’s not your turn? Then check out Mint Tin Mini Skulduggery.
J.S.

It’s a centuries-old dice game with modern twists making it contemporary for today’s tabletop gamers—the oldest name we’ve found for it is Läjähtää (Finnish for slam).

This modern-day interpretation has a deterministic element—the mystical crystal skull—to offset the luck-driven nature of this age-old game. Unleash the crystal skull to foil an opponent, stave off Skulduggery, or gain victory at the last moment.

It’s a nice way to unwind, connect with each other, and take a break from the hectic that life can be. It’s a light and addictive dice game for easy stress-soothing fun.

It’s so small and so easy to carry, we love playing when we’re out for a bite to eat. We hope you like it too.

Shatter a spirit die with a crystal skull. If only one spirit is rolled and shattered, turn over—no points. If more than one spirit, remove the shattered die, collect points for remaining spirits, and keep rolling the remaining dice. Multiple players can shatter and you can shatter your own. Used crystal skull goes to the tin (the ethereal realm).

Skulduggery: Move your points (but not your crystal skull, if you have it) to the player on your left.

Score exactly 15 points to win. If you roll over, you bust and collect no points (but if you can shatter your own and get points, go for it and keep rolling). If not, then it’s the next player’s turn.

Advanced mode: If you’re rolling only two dice (because one was shattered) and they come up as a non-scoring pair (i.e., a bust or not spirit dice), the coin comes out hourglass-side up. If the coin’s out—it flips for Skulduggery! Pass your points clockwise. It doesn’t matter if you have your crystal skull or not—you never get your crystal skull back on a pair.

Take three dice out of the tin (the ethereal realm) and give each player a crystal skull. Each player rolls one die. Highest number is the first player who then rolls again to determine the spirit number—rolling this number is called the spirit die (dice) and determines how all players collect points. Turns move clockwise.

Thwart your opponent’s roll by using your crystal skull to shatter and remove a spirit die. If only one spirit die was rolled and it is shattered, that turn’s over, and the next player rolls three dice. If the spirit number appears multiple times in a roll, multiple players can shatter and remove those spirit dice. However, if any spirit dice are still showing after shattering, collect your point(s) and continue rolling the remaining dice as long as spirit dice appear. In other words, if you can’t collect points, your turn’s over.

You can also shatter your own spirit die!

The option to shatter goes clockwise with one chance per player (in a 3- or 4-player game, if you’re next and pass on shattering and then no one else does, you can’t then decide to shatter). Feel free to openly discuss who might shatter. Once you shatter a spirit die, your crystal skull goes to the ethereal realm (the tin).

The current player doesn’t collect points for shattered dice, but they do continue rolling with the remaining dice if any spirit die is still showing.

Special rolls: If you’ve used your crystal skull, you reclaim it from the ethereal realm with a three-of-a-kind roll, a triple. If the triple are spirit dice, then you also collect 10 points (if none are shattered).

If you roll any triple (spirit or any other three-of-a-kind) and can’t collect points or reclaim your crystal skull or do both, then the Winged Death Head coin comes out hourglass-side up, and it’s the next player’s turn.

If the coin’s already out, you must flip it over to reveal the dreaded winged death head—brace yourself as the spirits of the ethereal realm burst forth! 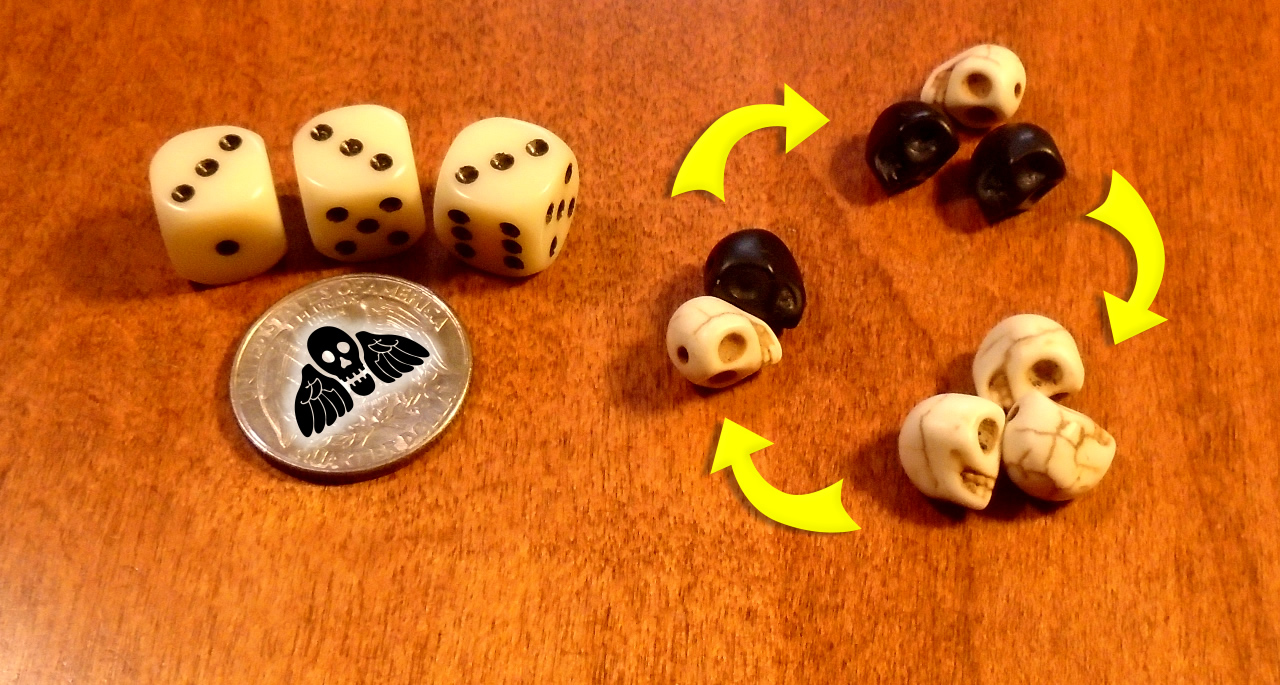 Everyone keeps their crystal skull (if they have one) and everyone passes their points to the player on their left. That’s SKULDUGGERY! And the winged death head coin now returns to the ethereal realm.

Fight the ethereal realm for power with straights!

A spirit die can be shattered in a straight after points are given or taken. If shattered, do not collect that spirit point and since no spirit number die is now showing, that turn’s over.

Score exactly 15 points to win. If you roll over, you bust for that turn and collect no points. Your turn’s over, and the next player goes.

It’s possible that multiple players tie as winners. In that case, celebrate and play another game!

Remember, you can escape a bust by unleashing your crystal skull upon yourself! Shatter your own spirit die. The ultimate act of self-sacrifice!

Advanced mode: If you’re rolling only two dice (because one was shattered) and they come up as a non-scoring pair (i.e., a bust or not spirit dice) take out the coin hourglass-side up. If the coin’s already out—it flips for Skulduggery! It doesn’t matter if you have your crystal skull or not—you never get your crystal skull back on a pair.

There are enough stone skulls for up to 14 points per player. The 15th point is your winning spirit die.

Need to pause the game?
The next player holds the dice before the first roll of their turn. Works great when you’re playing at lunch or dinner.

Get ready for an otherworldly opponent with clever AI—Æthereal Intelligence!

Take three dice out of the tin (the ethereal realm) and give yourself one crystal skull and three crystal skulls to the Spectre. Roll one die to determine the spirit number.

You start the game. Unless mentioned otherwise, apply the same rules as the standard game throughout (e.g. triples, low & high straights, the Winged Death Head coin, and Skulduggery!). The Spectre’s actions always occur before yours.

Your turn
On the first roll of your turn, where you don’t bust, and:

On subsequent rolls of your turn, if you don’t bust and the Spectre didn’t shatter anything on your first roll, the Spectre will shatter one die, if possible, unless it’s a triple (see below).

If you decide to shatter your own die to avoid busting, the Spectre doesn’t then “change its mind” about shattering a die (it had its chance!).

Spectre’s turn
The Spectre never uses a crystal skull to banish the coin on the first roll of its turn BUT it may do so later in its turn.

You roll for the Spectre as per the standard rules (re-rolling if it collects points, etc.). It gains points and can bust the same way as you can. After each of its rolls, it decides if it does something extra before you decide if you’ll shatter a spirit die.

Keep playing until you or the Spectre has exactly 15 points for victory.

The Latin on the coin:

Use two games for up to 8 player—same rules, same skulduggery!

Great for kids and fun for adults too, count sums and differences as spirit numbers.

Or play only sums or only differences, it’s your game! =)

Rolls of 3-4-5 invoke the curse of Evil Tim—everyone loses a skull, if you’re at zero skulls, Evil Tim takes pity on your unfortunate soul and grants you a skull of his own.

Mashup with Mint Tin Pirates by our Official Pirate Privateer

Start playing Pirates, but … doubles gets you Skulduggled! Instead of getting the treasure—play a game of Skulduggery—using the doubled rolled as the spirit number. It’s a game within a game!

Complete an entire game of Skulduggery and use the skulls you end with to continue Pirates.

Here are the twists:

Oh, I’ve read the rules, I love them. I really like that you have the crystal skull to thwart your opponents. It gives the chance for interaction even when it’s not your turn, I really like that. I also really like that everything’s included. Often times with these type of games you need pen and paper to keep score. Add to that these components are bulletproof and it’s a multi-player game that ACTUALLY fits in your pocket! ;)
James S. from Facebook 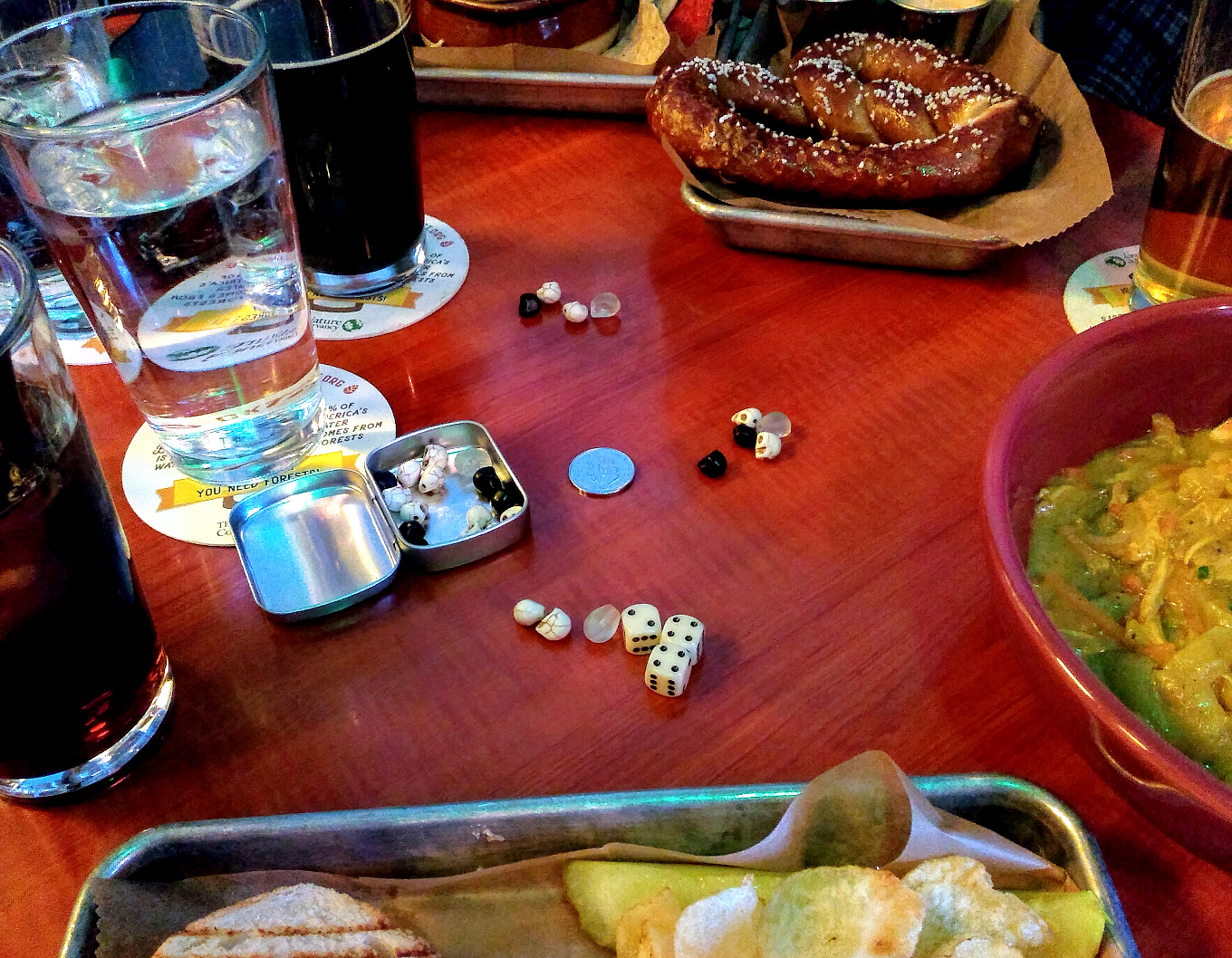