This is a simultaneous, competitive, and frantic 2-player game all packed into a tiny tin. So ridiculously small that it makes other games look monstrously huge!

You feel a lot of anxiety in a good way. And it’s great!
A lot of fun packed into it.
Spaghetti Meeples

A little worker placement, a lot of resource management, and some area control all in a competitive real-time microgame.

Luck is no longer chance—it’s your predominant resource. Maximize it with your best split-second decisions. Relentless decisions until the very end.

A single wrong action can determine your survival. A few wrong decisions by both of you can mean the end of humanity. 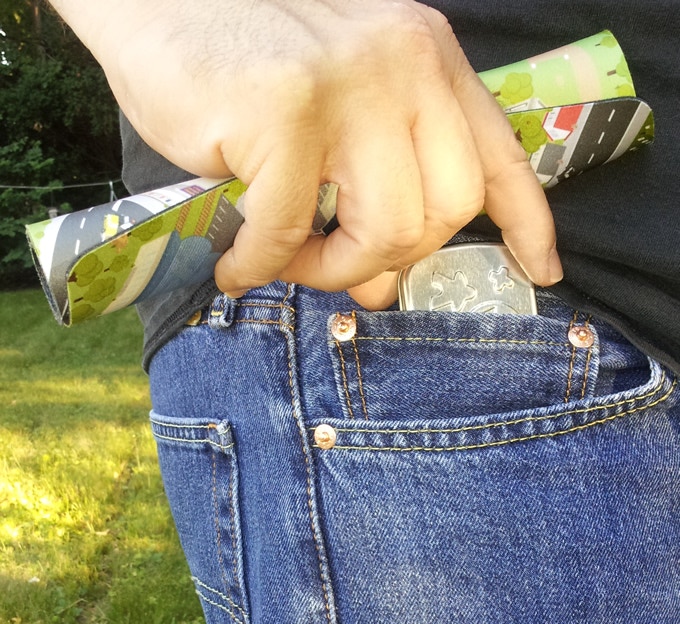 Dump out the game tin and choose a color. Place 4 of your meeps laying down and 1 standing on your side of tin. The game tin is the Fallout Shelter (FoS).

Stand the green monster a few inches from FoS with the green die behind it with the 6 facing up (Kate and I like to start the monster on 4).

Place 2 white supply boxes between the FoS and the nefarious monster.

Get your meeps to their feet, stay on yours, secure the FoS (Fallout Shelter), get 1 supply box, and close the FoS!

Your actions are on your rolled 7s and you need 1 standing meep to help your meeps or to knock down others.

FoS holds a maximum of 7 meeps.

Start the game and roll your dice. The standard game is simultaneous rolling, not turn-based. But you can play turn-based, if you prefer.

Only 1 supply box is needed in the FoS—it doesn’t matter who brought it in. 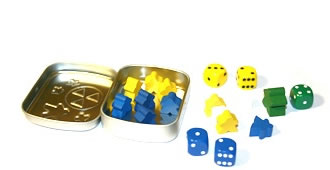 What about the monster?

There are 3 game modes—decide before start: UH-OH, OMG, or CRA-CRA!

UH-OH activates monster’s die when supply box gets into the FoS. This is standard play.

When the monster die is on 1, a roll of snake eyes (double 1s) by either player ends the game. The monster gets in FoS and eats you!

But … either player can be a hero by tossing 1 of their standing meeps onto monster die!

That meep is forever gone (but never forgotten). The next snake eyes ends the game unless another meep jumps on monster die.

Sacrificing a meep doesn’t need a roll of 7 and can be done with a meep from inside or outside of the FoS, but only when monster’s die is on 1.

If that’s a no and no one sacrificed a meep, then the monster wins! And you both lose.

OMG mode activates monster die as soon as the game starts. This is a faster game and it sucks to be human.

CRA-CRA (\krā-krā\) allows either player to activate and turn down monster die by using any of their rolled 7s, in addition to the normal turn down on matching doubles.

Dial the difficulty—is the game too easy? Set the monster die on 5, 4, or lower! 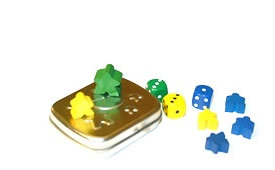 This Euro-style scoring is for both tournament play and friends who want to keep a running total—the optional mini journal can record each kind of scoring.

3 POINTS - Survivor
FoS is closed with 1 supply box and 4 of your meeps in. This is the fastest win.

2 POINTS - Selfless Hero
Rather than simply lose, you help your opponent win and save humanity by jumping on monster die.

1 POINT - Sux2BU
You lose and made no sacrifices. The monster eats you and your opponent wins. But at least humanity lives on!

0 POINTS - Bah! Buh-Bye Peeps
You both lose. The FoS never gets closed and monster eats everyone!

I like the game a lot.
The Cardboard Dungeon 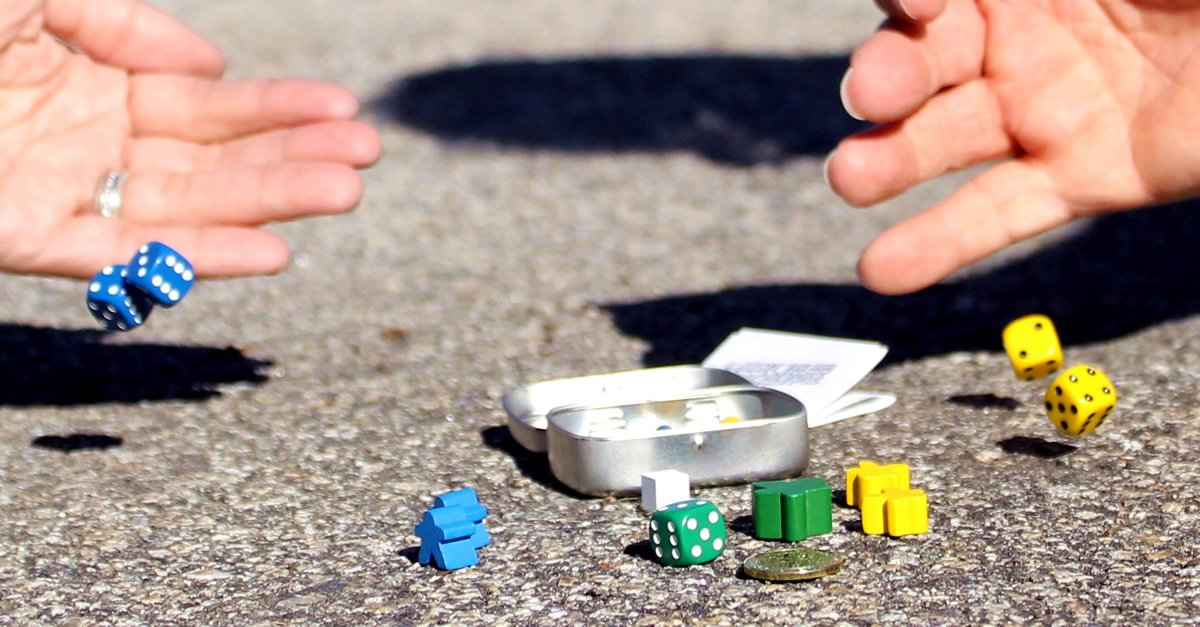 Note: Play the game a few times without the Manhole Expansion to get a feel for strategy and tactics.

Place the manhole cover behind monster with the SEWER side facing up.

The manhole cover can be used to knock monster down OR to open the closed FoS.

Claiming the manhole cover activates the monster if not yet activated.

The manhole cover can only be thrown once. UPDATE Below!

The monster keeps rolling down as in normal play.

No banking of rolled 7s—you can’t roll and hold a 7.

Both of you keep rolling if the FoS is reopened.

Once lid’s closed again, it’s only a matter of time before monster eats any outsiders, so Game Over.

Update: After discussions on BoardGameGeek, there’s no reason to limit the use of the manhole cover. If this game mimics real life, you could use it as many times as you like—simply reclaim it with 7 and rethrow with another 7. While throwing the manhole cover many times extends the game, the monster will eventually end it. Feel free to call this rule anyway you like—it’s your game. =)

Expect total chaos and even tales of noble sacrifice, as players can feed their meeples to slow the monster, and gain respect points even if they don’t get into the shelter.
Creaking Shelves

Think of this as real-time head-to-head Craps (1,800+ Craps books on Amazon). This is what makes the game fun and spaces out your ever-changing rapid-fire tactical decisions—time to survive is short!

What’s in the game?

This game is from maker-to-player and the components come from US vendors.

Deluxe components are pictured at bottom of page. 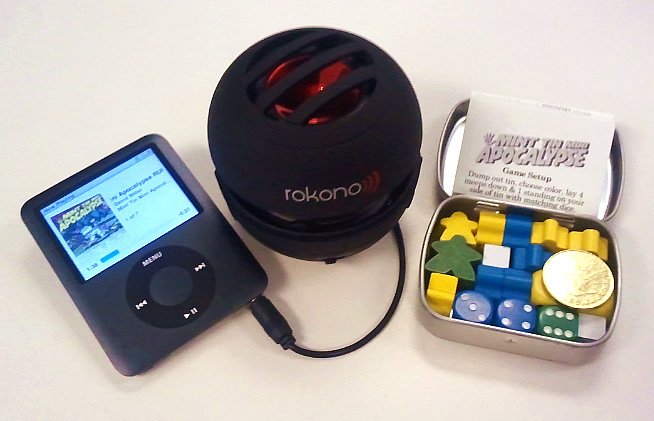 The game components may be tiny but they have the power to make or break you.

As the fallout shelter (FoS), the game tin is a component itself.

Made of steel, it fits the rugged doomsday apocalyptic theme. In keeping with the maker-to-player philosophy, we emboss the tins ourselves; we designed a pair of embossing plates and had them 3D-printed in stainless steel and use an arbor press. 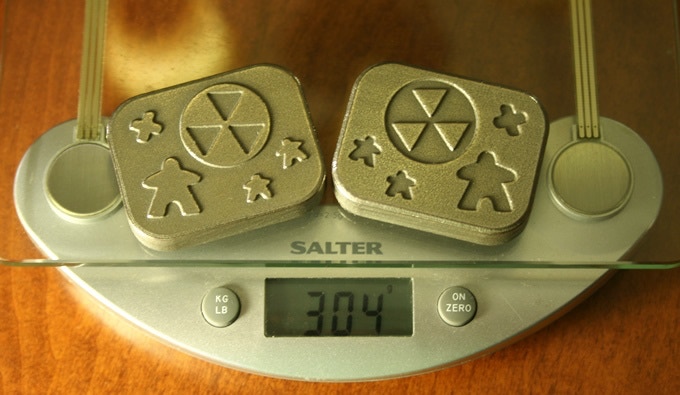 You might think you’re in charge, but no matter how many strategies you have, luck always plays a part in your survival. Chaos and unpredictability oppose you at every turn. This is, after all, the apocalypse!

When you use dice head-to-head like this, it’s no longer just luck—there are 1,876 books on Craps—a two-dice game! Dice are often a random event mechanic in games, here they’re your resources. And they’re Chessex—the world’s best dice.

At the last minute, a manhole cover was added as an expansion—the Manhole Expansion!

Ready for a more high-pressure strategy? With the Manhole Expansion, the monster’s after you the moment you claim the manhole cover.

Why would anyone do that? To pressure their opponent!

The little solid brass manhole cover is a minted coin—not cast—so rest easy, it will survive many apocalyptic events …

The game tin isn’t the only rugged thing. Game instructions are printed on REVLAR paper—a waterproof and tear-resistant paper used for geocaching and extreme outdoor maps. Since everything’s dumped out for each game, the instructions have to be tougher than non-apocalyptic glossy paper. 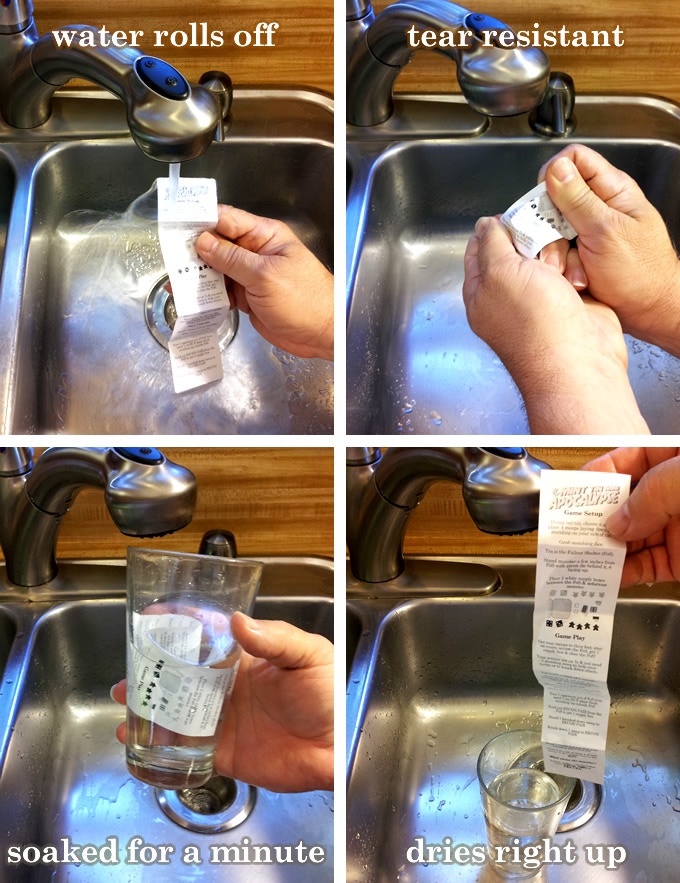 … freakin’ amazing! You’re totally engaged. Like an actual mini apocalypse happening on the table.
Your strategy has to change based on what the other player’s doing. A ton of replayability and a ton of fun.
NVS Gameplays

How do I arrange the pieces in the box? Try this:

It’s a nice day in Meepleton. You and your friends are enjoying the day without a care in the world …

Hurry! Get to the school’s forgotten fallout shelter.

Once two or more of your team members make it inside the shelter, send out a reconnaissance pair to grab a box of supplies. One box is plenty and it doesn’t matter who grabs it. But the monster spots you once you do—so you gotta be fast!

The shelter holds a max of 7 and it takes 4 from the same team to pull the door closed.

Do what you must to survive. If you’re standing outside, knock down an opponent and make them scramble to their feet again. If you’re in the shelter, shove them out and make room for your team.

Once the fallout shelter is closed, it sucks to be outside!

But wait! It might not be over if you spot a manhole cover. Grab it and knock the monster down or use it to pry open the fallout shelter. If you grab the cover before you secure the box of supplies, the nefarious monster will surely notice you. Don’t waste time and be careful!

I find myself thinking about what I might do next time. You get engrossed in the race to the shelter, especially if you dial up the monster. When I want a short game, a small footprint, and fun, this is a game I’ll be reaching into my pocket for.
Roger’s Reviews on BoardGameGeek

Solo variant #1 - The needs of the many … by Nick Shaw

Three player variant - Where’s the "I" in "Team"? by Nick Shaw

Only needs one game! This is one of my faves because it for includes a third person as the monster.

This one uses two games.

Save the VIP! variant by Lee T.

One of your meeples is a VIP and should be marked in some way to indicate this. The VIP meeple moves the same but can’t pick up the supplies. However, if your VIP survives you get a bonus point for saving them.

There’s extra strategy around when to move your VIP in and when/whether to kick the opponent’s VIP out.

The VIP adds a twist because of its limited ability.

Alisa is learning her numbers and her dad, being an awesome tabletop gamer like all tabletop parents, made his own variant that she loves.

Here’s what you need to play:

Set up the game with all meeples standing outside of the FoS and the misunderstood monster lurking about.

This variant is guided solo play and you move one meeple into the FoS when the number showing on the pair of rolled dice is equal to the number of meeples outside of the FoS.

When you have 6 or fewer meeples outside of the FoS, put one die aside and roll only one. Keep moving meeples in when the die roll matches the number still outside.

When the last meeple is moved in on a roll of 1, close the lid, and place the monster standing on the tin.

Everyone is safe and the monster is out of luck. This is a great way to learn to count! Have fun! =)

This variant is turn-based and is a different approach with an interesting take on the game.

Rules in French by Francois

Excellent and official French translation of the base rules in a PDF.

Rules in German by Erik

Outstanding and official German translation of the base rules in a PDF.

Rules in Spanish by Didac

Fantastic and official Spanish translation of the base rules in a PDF.

Rules in Italian by Daniele (Diggi at BGG)

Wonderful and official Italian translation of the base rules in a PDF.

Grab the zip download and copy the entire seven-track Mini Apocalypse Album on your MP3 player or listen to the first three tracks here. 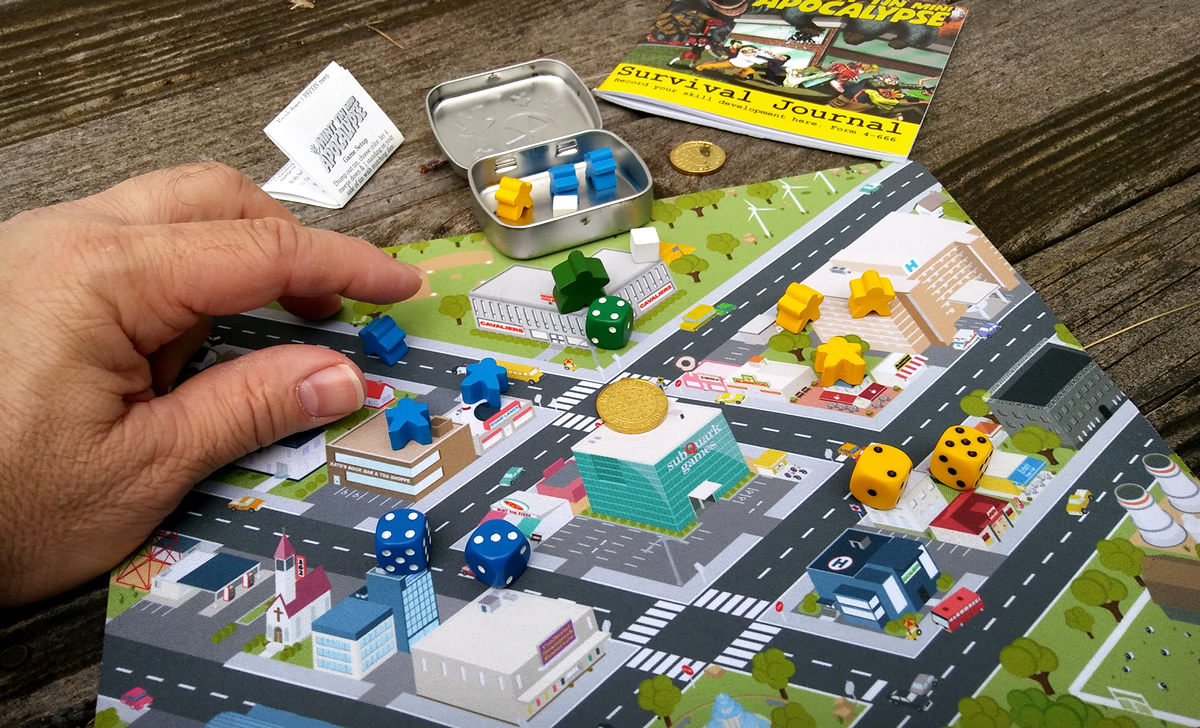 The Deluxe version adds an 11-by-8½ inch mini-game mat, a scoring journal for both normal play and tournament scoring, and an extra manhole coin for your own game variants. 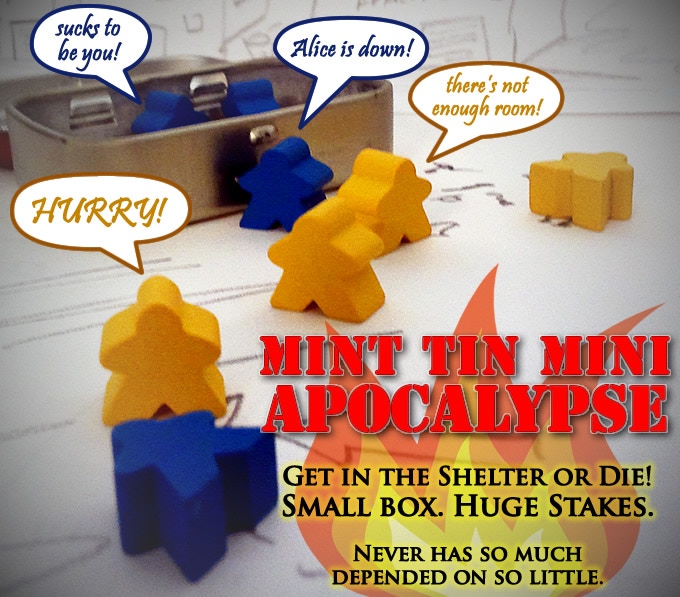 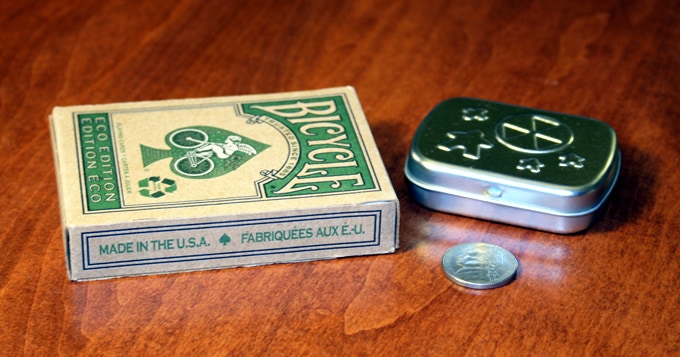